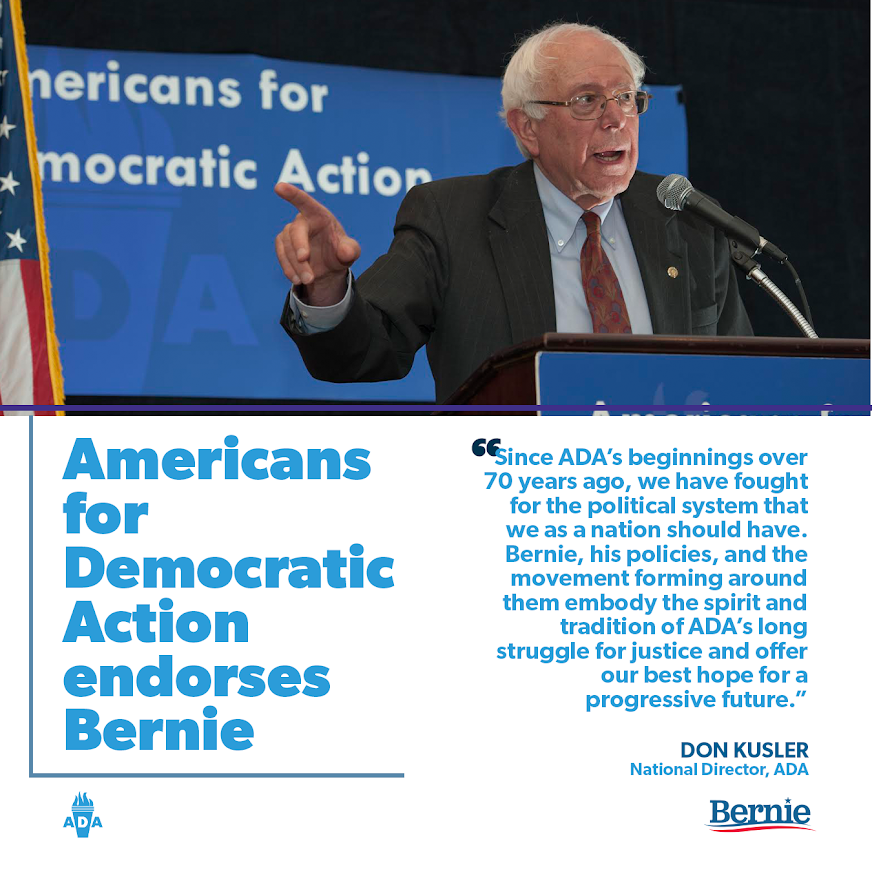 “As Americans for Democratic Action we stand for a liberalism that moves with the times.”

Those words are the opening to Americans for Democratic Action’s founding statement drafted more than 70 years ago by such iconic political figures as Eleanor Roosevelt, Hubert Humphrey, and Walter Reuther.

Over those 70 plus years ADA has pushed, pulled, and countless times won on our issues.

However, at this moment, we believe that the culmination of those years of toil are not only most needed but that the times have moved for our liberalism to blossom.

Looking back again to our earliest days, we connect with these words: “Liberalism is a demanding faith. It rests neither on a set of dogmas nor on a blue-print but is rather a spirit which each generation of liberals must learn to apply to the needs of its own time.”

This is OUR time and we must not let it pass.

To that end, ADA enthusiastically endorses the candidacy of Senator Bernie Sanders to be the Democratic nominee for President.

“For his steadfast leadership and his unwavering support of issues important to ADA, Senator Bernie Sanders has earned our enthusiastic support. From his earliest days in Washington, the Senator has been one of ADA’s closest and most reliable friends,” says ADA Executive Committee Chair Kurt Meyer. “From this point forward, ADA is committed to doing everything possible to ensure that Senator Sanders receives the Democratic Party’s nomination and ultimately is elected President in November.”

Now, ADA is embarking on an organizational expansion to bring our movement for equality and justice to a broader local and state network. ADA has the experience and plan to win. Connecting with people on a more personal level, building power for change, and enacting that change through education, policy, and more willing representative bodies is essential to our future and that of the nation.

Our electoral plan for 2020 focuses on 6 key states where we believe our efforts can simultaneously help gain progressive victories for state races, the U.S. Senate, and the Presidency.

“It is an honor to receive the endorsement of the Americans for Democratic Action, who have been dedicated to keeping FDR’s progressive ideals alive since its founding in 1947. Together we will defeat Donald Trump with a coalition of working class Americans.” – Senator Bernie Sanders

“Since ADA’s beginnings over 70 years ago, we have fought for the political system that we as a nation should have,” noted ADA National Director Don Kusler. “Bernie, his policies, and the movement forming around them embody the spirit and tradition of ADA’s long struggle for justice and offer our best hope for a progressive future.”

The fight against inequality and for justice whether racial, economic, or gender is at the heart of ADA’s mission and is at the core of the movement for change that Bernie Sanders stands for. Among our shared goals are universal health care, free college education, fair trade, and putting an end to military misadventures. ADA joins Bernie Sanders in the movement to change the rigged political system in order to reach these goals.

Support our work by making a donation today. Donate HERE or on ActBlue